At the beginning of 2018, after we launched our 4th tool, we had many discussions about how to increase the synergy of our tools in terms of SEO.

Our philosophy of having highly focused tools, all on separate landing pages, hasn’t changed. However, we wanted to boost their SEO potential by migrating them to one domain: mangools.com.

And that’s exactly what this 301 redirect case study is about. Let me tease you a bit: This is not the usual success story of 301 redirect!

Mangools as a brand has covered all our tools for more than 2 years. It would be a logical step to migrate them on mangools.com while keeping in mind that we don’t want to create all-in-one tool. Mangools is a package of SEO tools.

On the other hand, building authority and quality link profile for a new domain every time we launch a new tool isn’t much effective. It would also bring additional possibilities when targeting topical keywords.

That’s why we decided to migrate the domains to one and we chose serpchecker.com to test the outcome.

This case study is based on the following time period: February 2018 – June 2018, mainly on these 5 periods:

The findings are based on the data from:

Here’s the deal: serpchecker.com has been online since summer 2016. Most of the time, it’s been considered as an add-on to KWFinder. The tool itself and its features are designed for an in-depth SERP analysis.

At the time of doing the 301 redirect, there were 4 subpages. The original SERP snippet of serpchecker.com:

These are the numbers before the redirect

This is the total number of sessions vs. organic sessions “Before redirect” (February 5 to February 21):

The numbers are based on the “Landing Page” report from Google Analytics.

I picked 10 keywords and their average positions, CTR and the number of organic clicks they generated from February 5 to February 21.

I’ve selected both branded and non-branded terms with various rankings, CTR and organic clicks to cover as many circumstances as possible.

We read a lot of guides and case studies to eliminate all possible mistakes. We even discussed our plans with a well-known local SEO agency here in Bratislava.

These were the tasks:

The structure of new landing pages was easy. We moved the website and its subpages to mangools.com:

Results of the redirect

We deployed the changes on February 21, 2018, around 3 pm UTC/GMT +1. It was a beautiful winter day and we were eager to see the updates indexed by Google. Some of us could see the updated search results after 24 hours!

You can imagine the situation: the whole team staring at keyword rankings in Search Console, SERPWatcher and Google search.

Hooray! This is it:

The 1st evaluation of rankings

After 2 or 3 days, the keyword rankings looked really good. I compared these 2 time frames:

The rankings decreased by 0.81 positions in average. The positive value represents lower rank while the negative value is a higher rank.

The rankings decreased by 0.24 positions in average.

* The search volumes are based on the data from KWFinder

When we look at the numbers, during the first 17 days after the redirect, it went pretty good.

The 2nd evaluation of rankings

We decided to wait a bit before analyzing the results again. Well, no, we didn’t. We were doing it almost every day but for the purpose of this case study, I included the selected time frames because we made some changes in structured data (will be explained below).

Moreover, the Easter holidays took place, the website traffic was low, so the results wouldn’t be comparable.

The 2nd evaluation is based on these 2 time periods:

The rankings increased by 0.78 positions in average. The positive value represents lower rank while  the negative value stands for higher rank.

The rankings increased by 1.44 positions in average.

* The search volumes are based on the data from KWFinder

A few weeks after the redirect, the rankings increased! But we all know that SEO and rank tracking is not only about ranking #1.

Here we go! This is the part where the tables have turned.

Let’s compare the average CTR of our 10 keywords in the first 2 tracking periods:

The CTR of all the tracked keywords dropped. And as you can see, the drop was brutal. We started losing a lot of organic traffic.

It wasn’t only about the 10 keywords. I took a look at all search queries in the Search Console.

Property: mangools.com, so I have to add the “page” filter to display results related to redirected SERPChecker pages

85.5K impressions generated less than a half of the clicks compared to 68.9K impressions. The overall CTR dropped from 2.5% to 0.8%.

Right after we saw the numbers, we started investigating. The CTR is mainly influenced by the positions and appearance of the website in Google search. It includes the title tag, meta description, site links, URL and rich snippets. 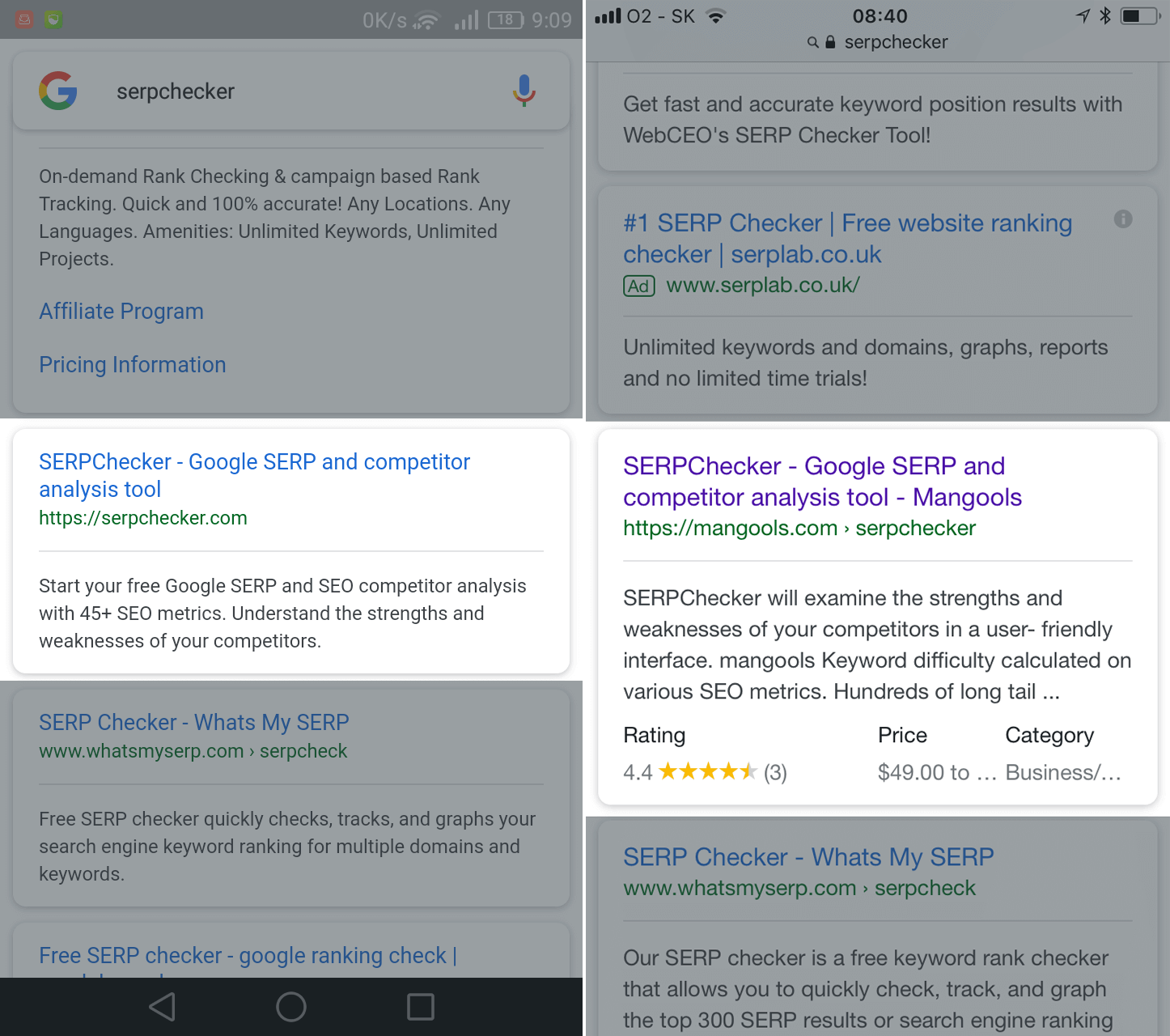 The only 2 reasonable arguments seemed to be the rich snippets and sponsored links (ads). We didn’t expect the change of the URL would affect the CTR that much.

We inspected many different SERPs of competitive tools and other SaaS businesses and came to a conclusion that the star rating may indicate a review or a blog post instead of a product landing page.

We disabled the rich snippets and couldn’t wait to see the results. Here are the numbers:

How about launching Google Ads?

Another thing that came to our mind was trying Google Ads. One of those coincidences that happen once in a lifetime, occurred when we were redirecting serpchecker.com to mangools.com/serpchecker.

Many of our competitors started bidding on keywords that serpchecker.com ranked for. One of the probable reasons is that Ahrefs launched their new tool called SERP Checker. As they are one of the biggest players on the market, the others didn’t want to stay behind. 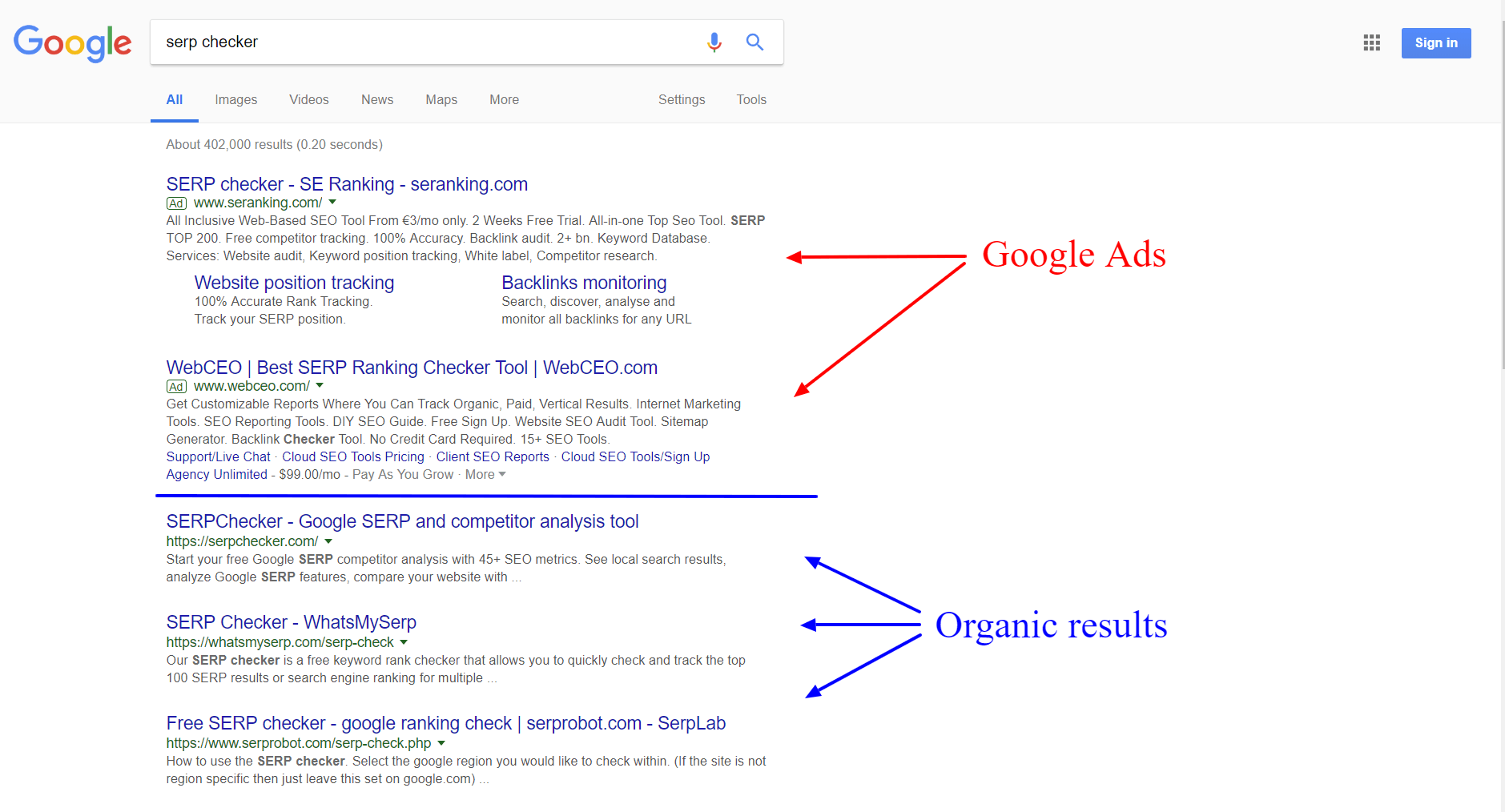 But the thing with the ads is a bit more complicated in the “SERP checker” market. The organic search results for this keyword and its related terms are full of tools that are actually rank tracking tools. And the ads are basically the same. 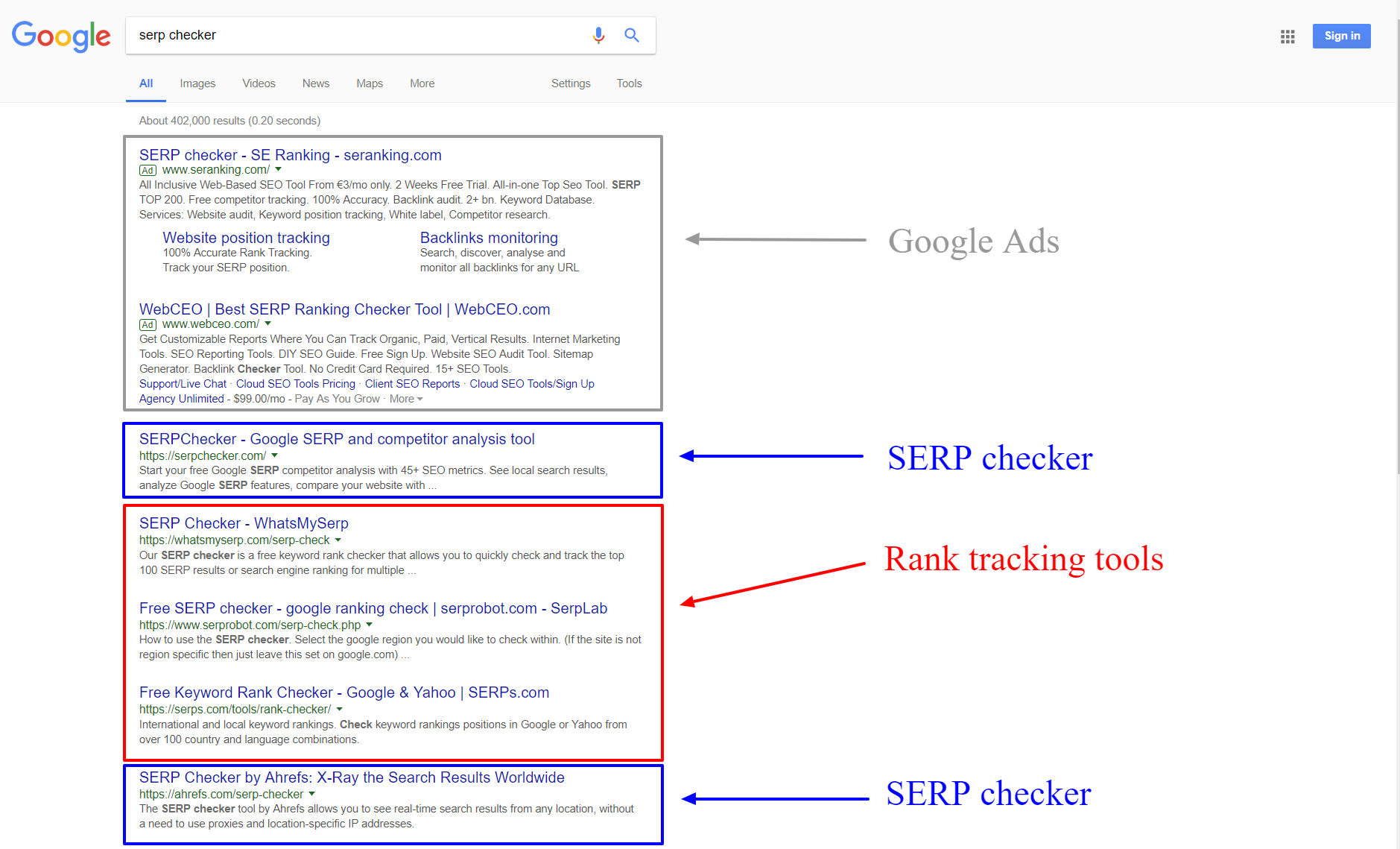 For a very long time, serpchecker.com was the only SERP analysis tool on the 1st page. We noticed the SERP Checker by Ahrefs on the 1st page in March.

To push the CTR and test new possibilities, we temporarily launched ads targeted on the most important keywords:

You know what’s funny? The Google algorithm is probably used to search results that are rank trackers. The ad relevance (to the landing page) according to AdWords for the majority of the targeted keywords was above the average. However, the quality score was only 3/10 in most cases.

The campaign was online for more than a month from April to June. The average CTR was only 3,41%. 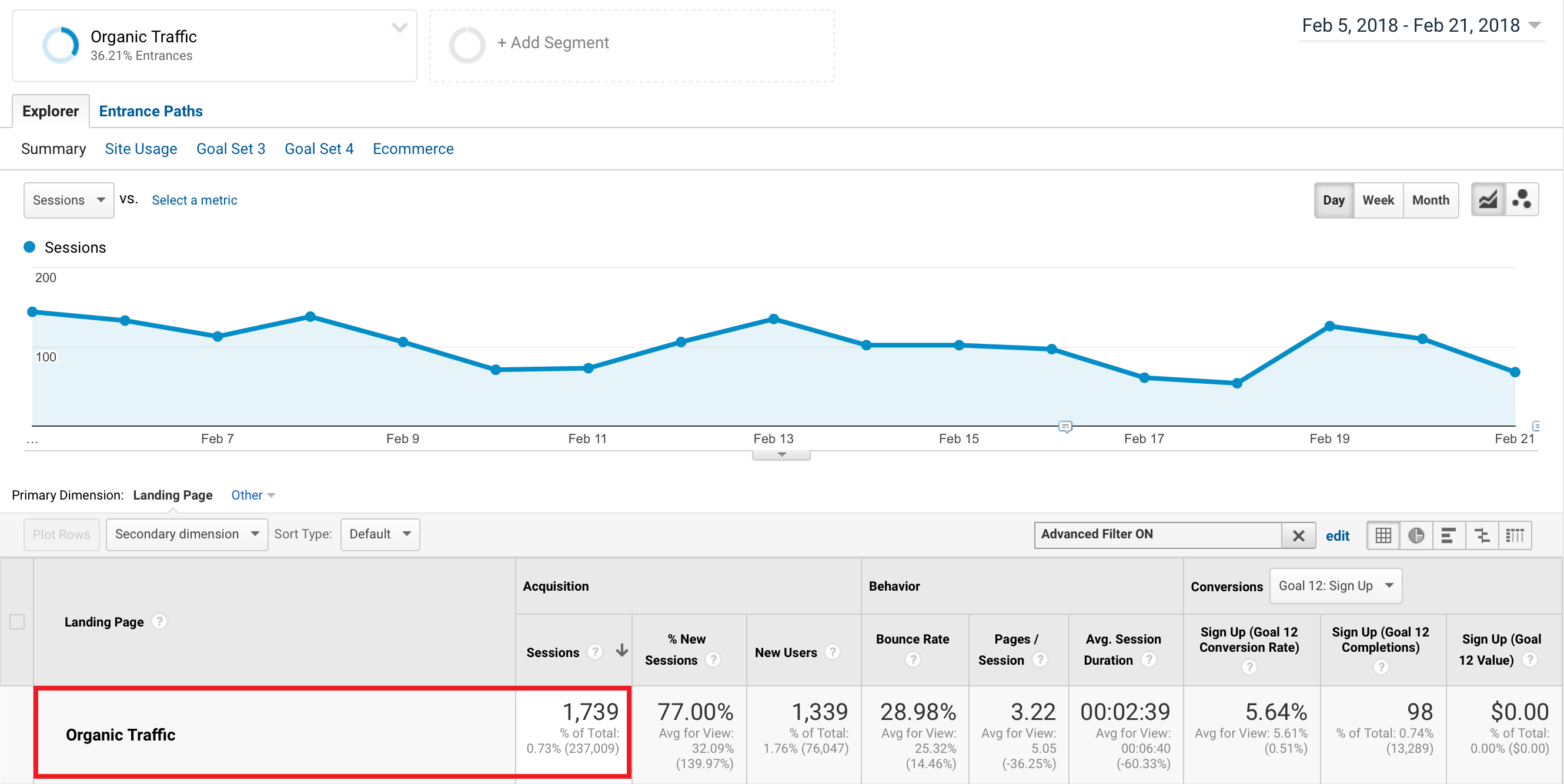 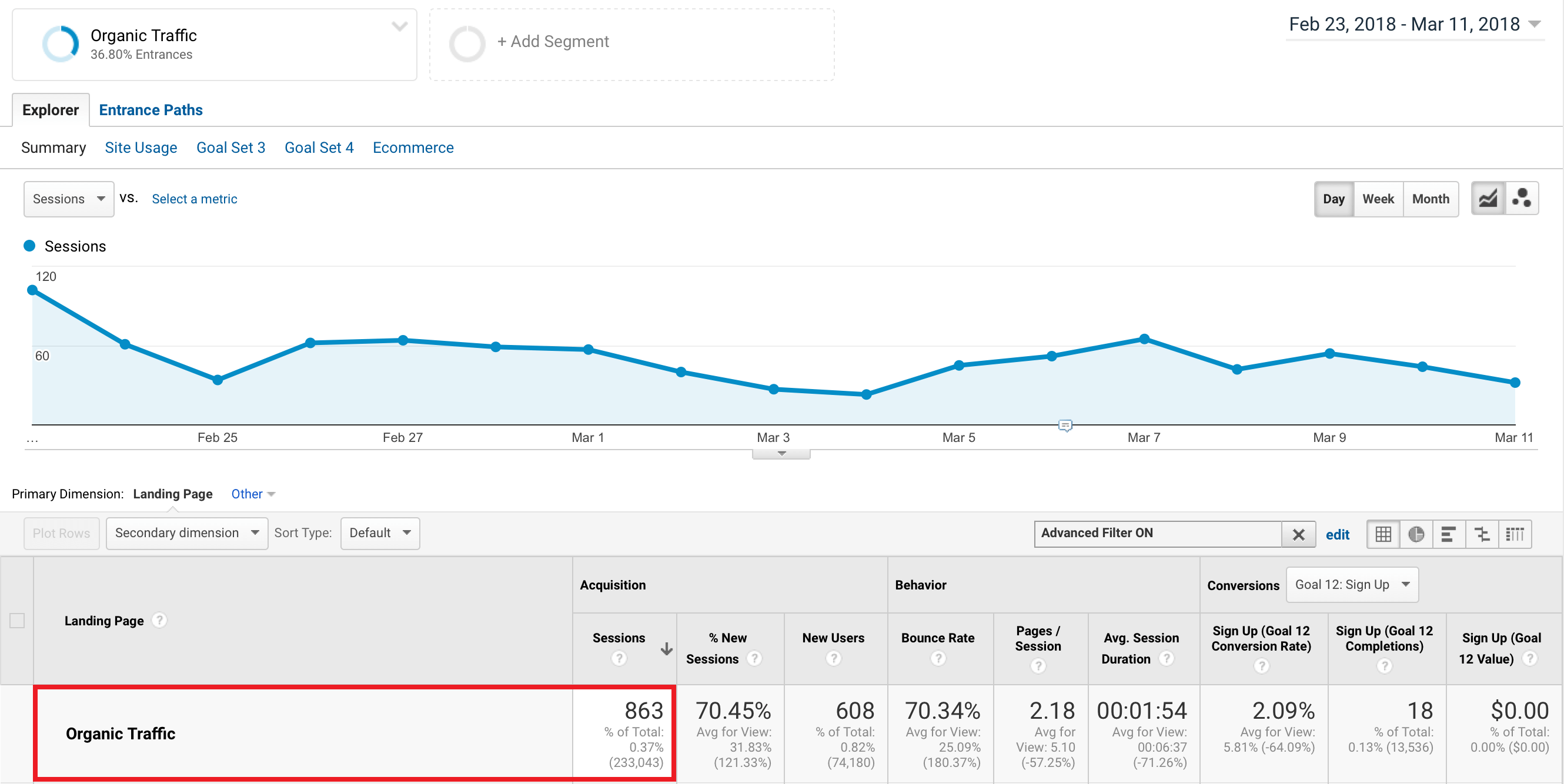 When I compared the “Before redirect” to “After redirect 1”, there was a 50% organic traffic drop.

The question is: What happened? From the technical point of view, everything was ok. Keyword rankings were slightly better and there were more organic impressions. We reviewed the list of potential reasons once again:

When I go back to the Google Ads – the most probable reason behind lower CTRs and organic traffic (at least we thought so) – it seems the numbers are reasonable.

But is it true that 2-3 sponsored links stole the 30% of CTR? According to the Advanced Web Ranking CTR study, it looks like it may be true.

The CTR for the position #1 without ads is 31,7% higher than with ads.

I’ve checked the positions #2 and #3 and the numbers were almost identical: 29,4% for #2 and 22,2% for #3. The difference decreases immensely in lower positions.

Given the numbers, we decided to continue with the tracking of the results. In case nothing changed or if we didn’t find another reason, we would be forced to reconsider our SEO and branding plans.

After more than 3 months, the organic traffic remained 27% lower, despite the keyword rankings were higher. 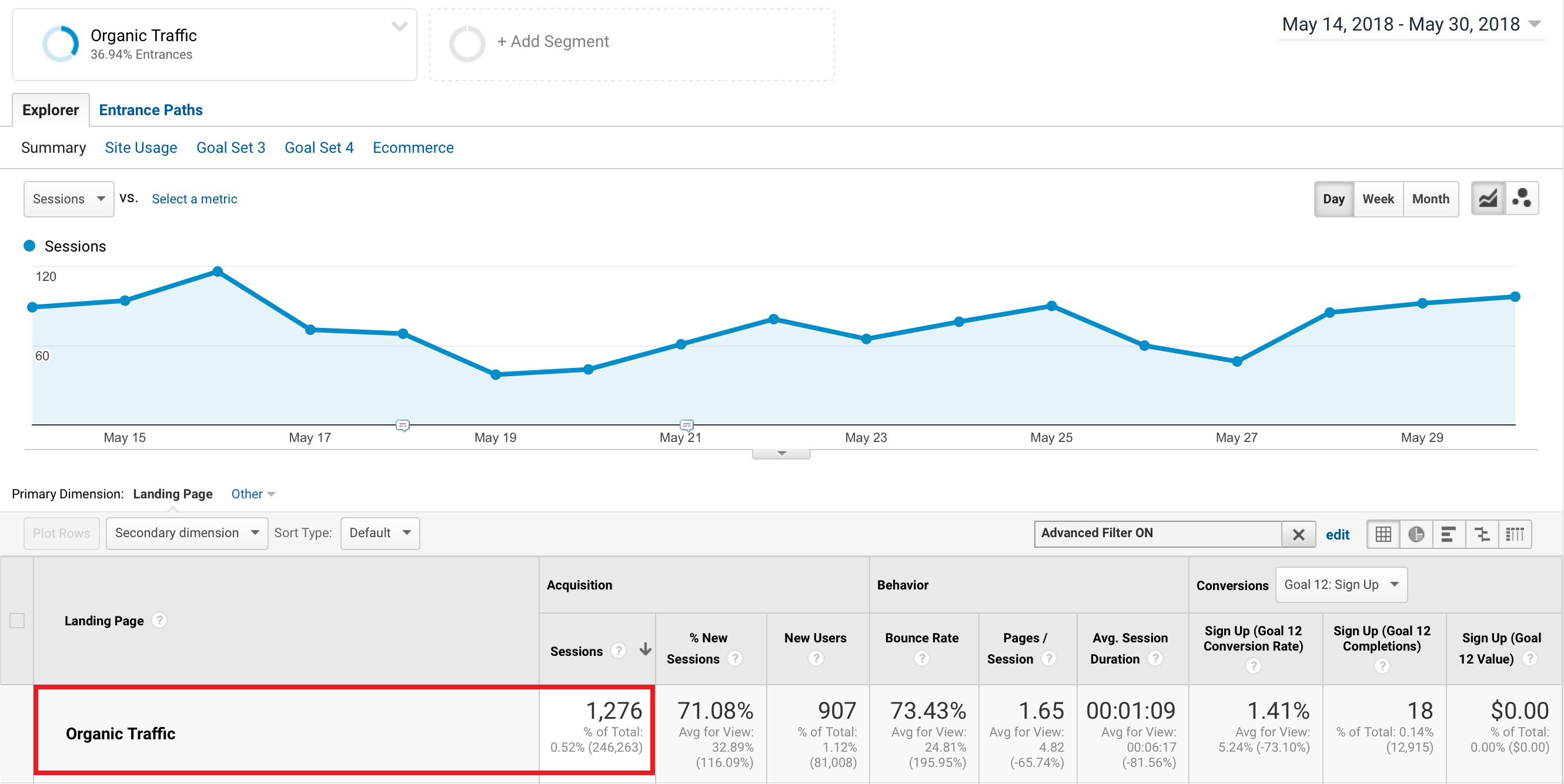 We were 90% sure the main reason is Google Ads. Yet there still might have been an unknown reason we haven’t detected and some of us even started to think that the drop was caused by the changed URL.

That is why we decided to revert everything to test this hypothesis. We got back to the checklist and deployed everything as it was in February. We did this on June 12, 2018, around 5 pm UTC/GMT +2. It was raining outside.

Results of the revert

These are the tracking periods I will focus on:

The “After revert” follows the same measuring pattern as previous time frames to keep the same conditions.

The majority of the organic positions for the keywords with the highest search volumes got back or even improved 2 days after the revert.

The CTRs followed the same trend. Some of them even improved for the keywords with the highest search volumes.

And here’s the comparison of the organic traffic “Before redirect” and “After revert”.

The current appearance of serpchecker.com in the organic search results is almost identical as it was in February. Below is the comparison of all 3 Google search snippets.

The only difference between the NEW and REVERTED is the URL: 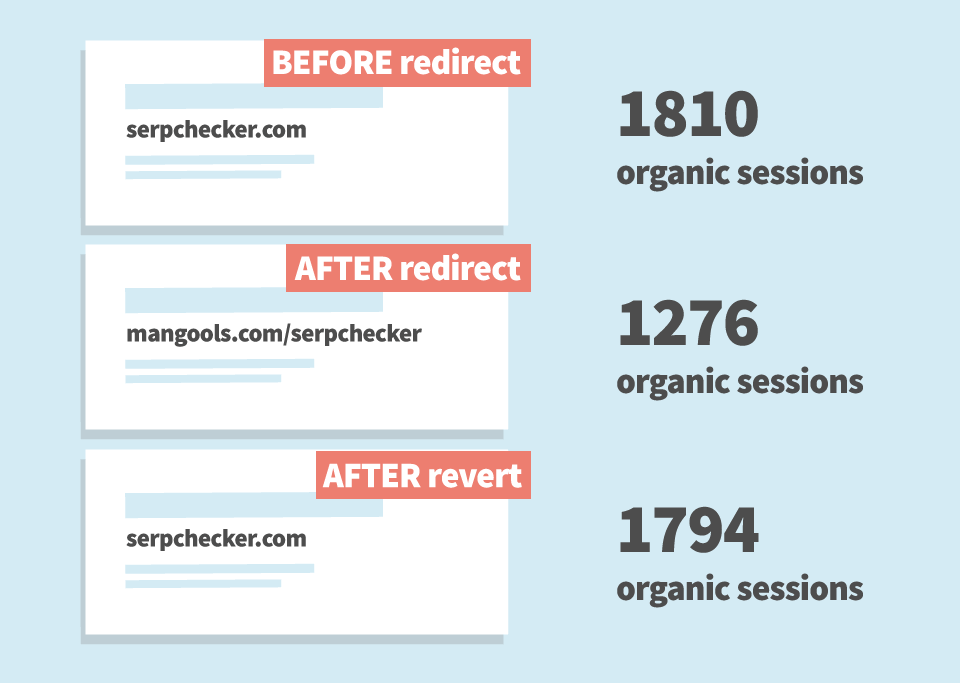 The latest results from SERPWatcher

I also took a look at our tracking in SERPWatcher to compare the results before the redirect and after the revert. Below is the screenshot of the Dominance Index, a metric we have developed to calculate the organic traffic share based on the tracked keywords, their positions and search volumes.

The index reached values from 20 to 26 before we decided to do the redirect. Right after the revert, it was 26. Nowadays, the metric oscillates around 40. It’s because the keywords with the highest search volumes improved their positions. In most of the cases, it was from the top 5 to #1.

Of course, this could happen with the positions if the website would stay redirected. But given the CTRs from the “redirected” time period, can you imagine how many organic clicks we would lose?

What did we learn?

Believe it or not, we are still not 100% sure why the CTR dropped so dramatically after the redirect.

We thought it was caused by the presence of the ads but as we can see, the CTR got back to normal after the revert even though the ads remained the same. 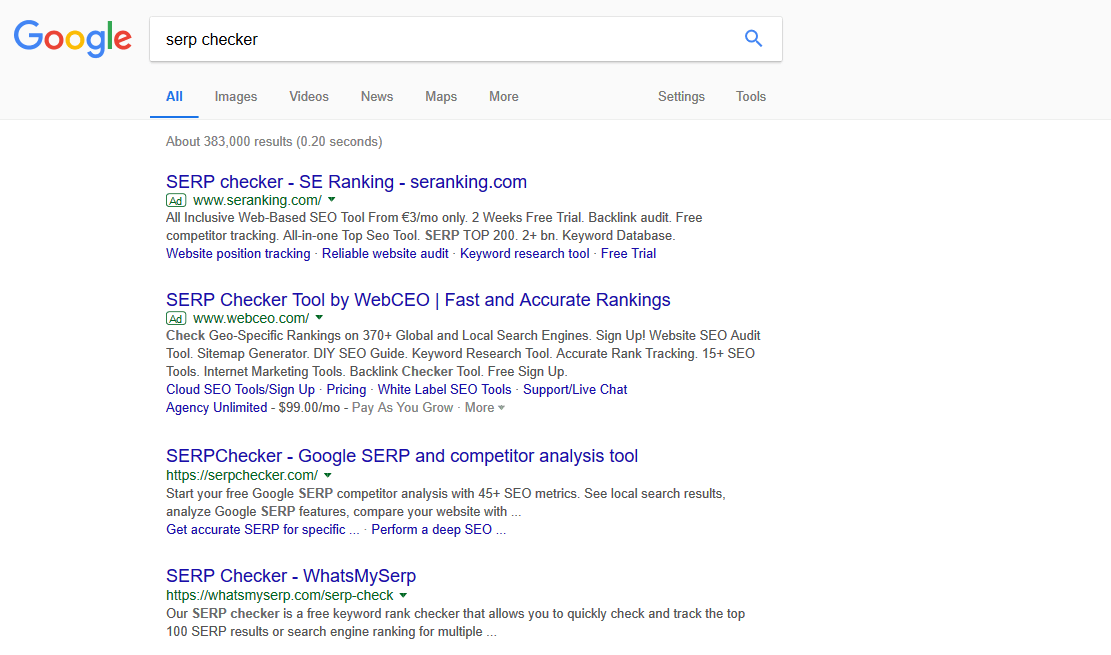 So the only logical explanation (from the known possible reasons) is that the CTR drop was caused by the change of the URL.

Although, it was the least expected reason, it kind of makes sense if you think about it. SEO is no longer only a technical stuff. UX and psychological factors influence the engagement in many ways that cannot be measured exactly.

On the other hand, this 301 redirect case study doesn’t fully explain why the CTR dropped for all non-branded keywords too. If any reason comes to your mind, don’t hesitate to let us know!

Get the latest content to your inbox. Subscribe for the Mangools newsletter. No spam, we hate it too. 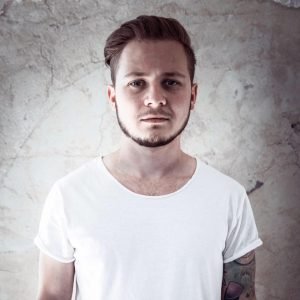 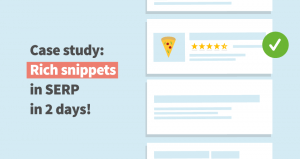 Fail and win: Rich snippets in SERP in 2 days!…

When I was implementing structured data for mangools sites in June 2017, I…