What is keyword density?

Keyword density is a metric that indicates how often a certain keyword is used in the text.

Most SEO experts agree that keyword density is an overrated concept that has never actually had any deeper significance in the SEO.

Should you care about the keyword density?

Despite the fact that keyword density has never been established as a significant ranking factor, you’ll still find people (especially on forums and Facebook pages) contemplating about the ideal keyword density. The numbers you’ll see usually range between 2% to 5%.

However, the answer to this question is very simple – there is no ideal keyword density.

The fact is that trying to use a keyword artificially only to reach certain keyword density usually causes more harm than good.

Why? Because that is not the way content should be written and there’s a high risk you’ll end up being penalized for keyword stuffing even though you don’t even realize it.

So, to answer the question whether keyword density should be taken into consideration: Yes, you can check it to make sure that you did not overuse certain keyword, or to make sure that the keyword you want to target is mentioned at least a couple of times in the text. 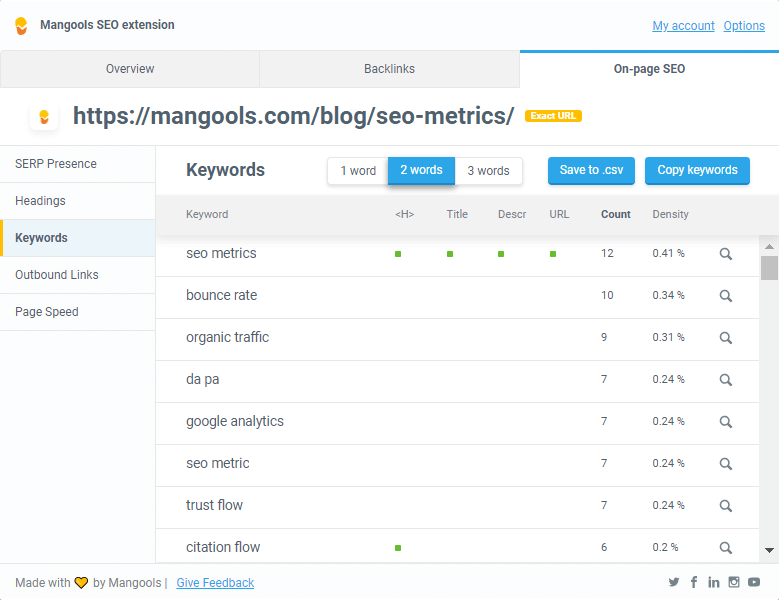 One of the free tools that can help you to calculate the keyword density is Mangools SEO browser extension.

Matt Cutts, former head of the web spam team at Google, did a video about the topic, where he states:

He also recommends a simple trick if you’re not sure whether the text is not over-optimized – to have the text read out loud and notice whether there’s anything that sounds artificial or forced.