What is black hat SEO?

Black hat SEO refers to all the techniques that try to trick the search engines in order to get higher rankings. These often include spammy practices and unethical actions with the only goal – to achieve better results as fast as possible no matter what are the means.

Black hat SEO is the opposite of white hat SEO which is a term used to describe search engine optimization in accordance with Google’s Guidelines.

Both therms originate in Western movies where men wearing white hats were the “good guys” and those wearing black hats were “bad guys”. 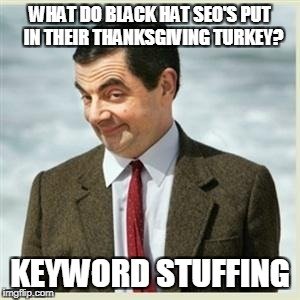 There are many black hat SEO tactics, though most of them are outdated and simply don’t work anymore because Google has learned to detect them and penalize the websites.

Is it worth to use black hat SEO tactics?

The short answer would be no. There are two main reasons:

Here is a nice metaphor by Search Engine Watch about black hat and white hat SEO:

White hats drive in the right lane, while the black Lamborghini is getting pulled over and given a ticket for speeding 50 mph over the limit in the fast lane. Granted, it’s quite possible that Lamborghini may never get that ticket as you’re watching it zoom by, but that doesn’t mean there isn’t a cop just a few miles up the road waiting with a radar gun.

Some SEO techniques that do not fall into either black hat SEO or white hat SEO are often called gray hat SEO. In general, the SEO public is more tolerant to them as they do not really harm anyone although gray hat SEO definitely isn’t “playing by the book”.

The first backlink is bought from a PBN made specifically to sell backlinks. The article contains 500 words and does not provide any added value to the reader. Actually, the website has no traffic at all and it links to anyone who is willing to pay.

The second backlink is bought from a high-quality website in the same niche as your website. The article where the link is placed is well-researched and gets some real traffic. People reading the article actually want to visit your site via the link, as it provides added value and makes sense in the context of the topic.

Are both links against the Google’s guidelines?

Can both be considered black hat SEO?

That depends on the interpretation. But most people would probably say that there is a big difference between these links and a backlink that provides added value should not be considered black hat SEO even if it was purchased.